An annual convention of the Libertarian Party of California was held 14-17 February (Presidents Day weekend) 2020 at the DoubleTree LA Westside in Culver City.

The Bylaws Committee published a report prior to the convention. In addition, several other proposals were made, with advance notice, independent of the Bylaws Committee. Many of the proposals in both categories were never considered, due to issues of time and quorum. Amendments were adopted on the following topics: 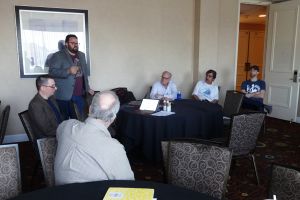 The Platform Committee presented a report offering many options -- a number of proposals to replace the entire Platform with something else, and a number of amendments of the traditional sort to individual planks. The convention was asked to select one of the options to be considered first, and the proposal to replace the entire Platform with the national Platform had the most support. But this proposal did not have enough support to actually be adopted, and the convention recessed without considering any of the other options. Another proposal made on the last day to make a minor change to one plank also failed. So the net result was no change to the Platform. 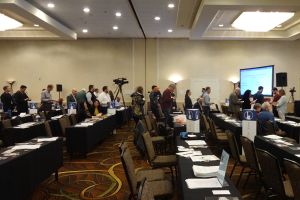 Election of At Large Alternates 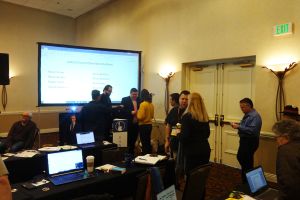 Election of LNC Representative and Alternate

California was eligible to name 107 delegates to the national convention. There were more than twice as many people seeking these slots. Because the set of nominees included many from out of state, proposals were made to modify the selection process to give preference to California residents, but none of these proposals was adopted and the selection was done using the procedure outlined in the standing Convention Rules.

Note: Voting was done by ballot on the final day of the convention, but the results have not yet been announced. 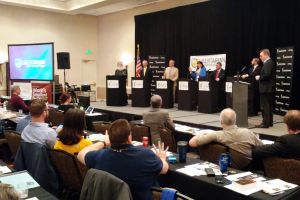 A number of candidates for the LP's nomination for President were present and actively campaigning during the convention, and several had tables in the exhibit area. The central event relating to the presidential nomination was a debate.

There were fifteen candidates present and interested in participating in the debate. Each was allowed a few minutes to introduce themselves during a session late Saturday afternoon. The delegates selected which six would be able to participate in the actual debate by casting up to five "tokens" each.

The debate itself was held on Sunday evening, 7-9pm. The moderator was Matt Welch. Video

Two straw polls were conducted, an "informal" poll immediately following the debate in which everyone present was allowed to vote, and the formal poll the following day in which only registered delegates could vote. 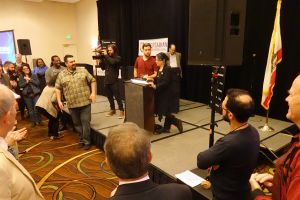 Announcing the results of the informal straw poll.

The vendor/exhibit area was locate in the lobby immediately in front of the main meeting room. Participating were several presidential candidates as well as other kinds of organizations.